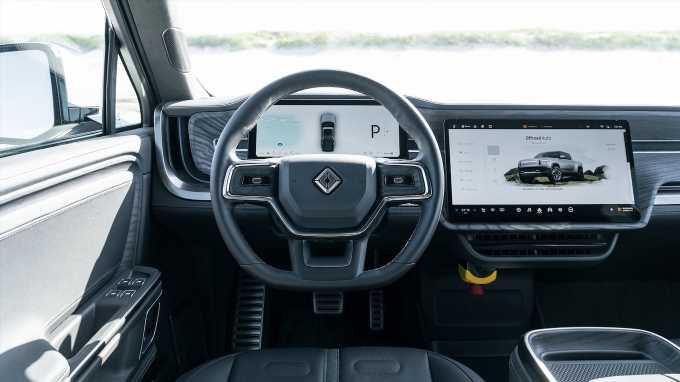 You usually know what you’re going to get when it comes to most automotive interiors. A Rolls-Royce will be opulent and timeless. A Tesla will be sparse and tech-forward. A Jeep will be functional and hard-wearing. But what about a Rivian’s interior? We spent some quality time recently with a pre-production 2022 Rivian R1T to find out.

Despite being the first modern electric pickup truck to hit the market, the Rivian R1T’s interior looks rather conventional. Up front is a lightly finished ash wood dashboard with a 15.6-inch landscape-oriented infotainment display and a 12.3-inch digital instrument cluster, with HVAC vents underneath the center display and on either side of the dashboard. A center console splits the two front bucket seats, while the three-across rear bench has a fold-down armrest with roll-door access to the R1T’s gear tunnel. Rear-seat occupants also have a 6.8-inch screen of their own mounted on the back of the center console.

Three different color schemes are available on the 2022 Rivian R1T: Black Mountain, which features black wood trim and black upholstery; Ocean Coast, which has tan wood trims and white upholstery; and Forest Edge, which features green upholstery and brown wood trim. No matter the color scheme you opt for, all R1Ts have vegan “leather” seats with patterned stitching and Compass Yellow accents throughout the cabin.

Is the Rivian R1T Comfortable and Spacious?

It depends, so let’s tackle spacious first. Sized somewhere between a midsize pickup truck (think Jeep Gladiator) and a full-size pickup truck (like a Ford F-150), the Rivian R1T’s cabin is plenty roomy for four grown adults, and it works for five in a pinch. The standard panoramic moonroof enhances the cabin’s spacious feeling.

The front seats (both heated and cooled) are tremendously comfortable and supportive. Over an eight-day span we spent more than 100 hours up front in the R1T’s cab, and we were pleasantly surprised afterward by how rested and refreshed we felt. The back seat was hit or miss, though. Shorter occupants found the seats comfortable, but taller passengers found them to be a bit soft in the lumbar area, forcing them to slouch.

Does the Rivian R1T Have Lots of Interior Storage?

Maybe not as much as a full-size truck, but it easily has as much as a midsize pickup. Ignoring the 4.5-foot covered cargo bed, in-bed trunk (occupied on our test Rivian by a full-size spare tire), gear tunnel, and frunk, the cab has lots of storage, too. Front door pockets are expandable, the center console is fairly deep, and it includes a tall lip on the floor, allowing you to place larger items (like a purse or laptop) without having to worry about them sliding around the cabin.

In back there’s a cubby inside the fold-down armrest, plus hidden storage underneath the rear bench.

Four, which isn’t quite enough. Two well-sized front cupholders pop out of the center console, and the two rear cupholders are in the armrest. We wound up using the cupholders for cups of coffee and cans of soda and the door pockets for bottles, despite the latter’s lack of a dedicated bottle holder.

Where Are All the Buttons?

Good eye! There aren’t too many in the 2022 Rivian R1T. Aside from the power-seat switches up front, there are window switches on the doors, “SOS” and hazard buttons on the ceiling, and scroll wheels flanked by buttons on the left and right spokes of the steering wheel. These are the buttons likely to get the most use. While driving, the left buttons and scroll wheel can adjust your volume and advance your audio tracks, while those on the left work the Rivian R1T’s cruise-control system. The wheel and buttons also adjust other parameters. For example, once you bring up the steering-wheel and side-view mirror menu on the center infotainment display, the wheels and buttons can adjust your wheel and mirror positions.

With the caveat that Rivian is still adding features to the 2022 R1T as it nears production, the baseline tech in this electric truck is pretty cool. Aside from the screens, some cool tech highlights include an advanced driver assist system called Driver+, HVAC vents adjusted by dragging your finger across the touchscreen (great, so long as you’re not driving), and a wireless charging pad on the center console.

Does the Rivian R1T Have Any Easter Eggs?

It sure does. There’s a powerful rechargeable LED flashlight hidden in the driver’s door (where you’d find an umbrella in a Rolls-Royce), a rechargeable portable Bluetooth speaker hiding beneath the center console, and the wireless charging pad is made up of tiny Rivian logos.

The 2022 Rivian R1T’s cabin is a genuinely nice place to ride in. There’s always temptation to think differently with a new EV—let alone one from a new company—but Rivian has confidently and successfully blended classic automotive design with forward-looking themes. 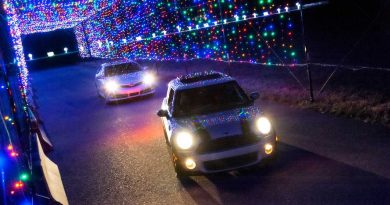 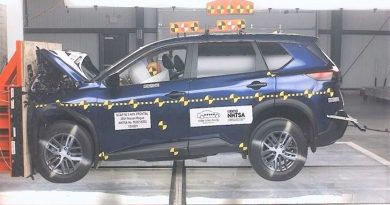 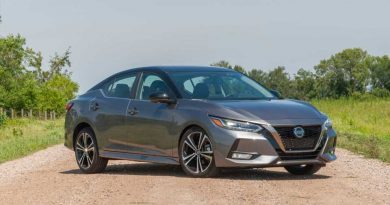 Review update: The 2020 Nissan Sentra blossoms into a competitor