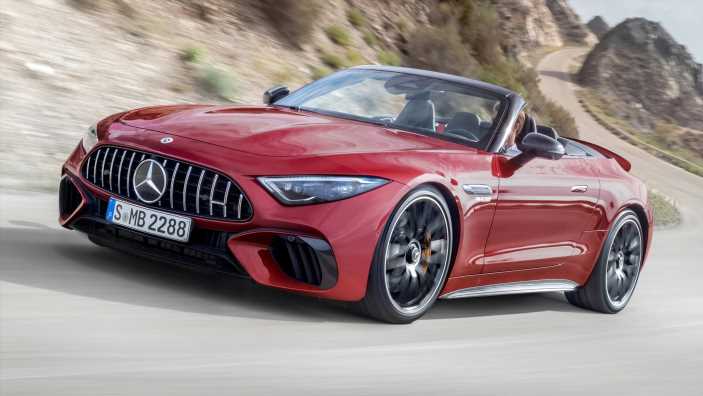 We caught a ride in the 2022 Mercedes-AMG SL-Class back in September, while a half-dozen prototypes underwent final shakedown testing at altitude. Now Affalterbach has shared more of the specifics about how the first AMG-developed Mercedes SL aims to become the sportiest SL-Class since the original while simultaneously improving on the comfort that has long been the hallmark of the popular Mercedes-Benz model.

At launch, all 2022 Mercedes-AMG SLs will be powered by a twin-turbo 4.0-liter M177 AMG V-8. The “entry level” car will be the SL55, with 469 hp and 516 lb-ft of torque, while the SL63 will make 577 hp and 590 lb-ft. The difference is attributable primarily to higher turbo-boost pressure and improved internal air flow in the SL63, as well as modified engine software. Future SL models for global markets will be powered by AMG’s 2.0-liter turbo M139 engine, which today produces as much as 416 hp and 369 lb-ft of torque in other applications. Mercedes-AMG also promises to deliver a performance-oriented plug-in hybrid model.

All-wheel drive will be standard on all 2022 Mercedes-AMG SLs to ensure owners can take the cars on ski trips, and to better deliver all of the engines’ peak torque. This illustrates another major difference between the SL and the AMG GT Roadster, with which this new car shares virtually nothing.

The GT Roadster employs a rear transaxle mounted rigidly to the engine via a torque tube. Transaxle designs pretty much rule out all-wheel drive (except on the Nissan GT-R), so the new 2022 Mercedes-AMG SL bolts its transmission and 4Matic all-wheel-drive system directly to the engine. This leaves only a slim differential to be packaged back where the rear seat goes (with limited-slip standard on SL63, optional on SL55 as part of the AMG Dynamic Plus package). The transmission is a nine-speed MCT 9G unit, which uses a wet multiplate clutch instead of a torque converter to reduce weight and inertia while enabling quicker, sharper shifts—especially in Sport and Sport+ driving modes. A Race Start function promises to deliver aggressive vehicle launches.

The new 2022 Mercedes-AMG SL63 will employ magnetorheological-fluid-filled active engine mounts similar to the ones we first reported on years ago in the AMG GT S. Expect them to be tuned for greater isolation in Tour mode, firming up for the Sport modes. It seems unlikely they’ll be able to deliver the slight handling improvement they lend the GT: When entering a corner, that car firms up its transaxle mounts ahead of the engine mounts, which slightly reduces front roll-stiffness to improve turn-in.

We’ve reported on AMG’s aggressive efforts at saving weight, including the “smart materials” body shell composed of aluminum, magnesium, steel, and carbon fiber that saves some 280 pounds. Then there is the switch from a folding hardtop to a “Z-fold” soft top, which apparently saves 46 pounds (revised down from the 80 we were quoted during the shakedown drive in September). But adding all-wheel drive, stretching the bodywork to add a rear seat, and incorporating all the latest safety, comfort, and convenience gear results in a curb-weight increase of about 220 pounds, with a quoted curb weight of 4,200 pounds. For comparison, the four current R231-generation SLs we’ve weighed have rung in at 4,090-4,106 pounds.

Smartening the materials mix of the mostly aluminum body-in-white helps boost torsional rigidity by 18 percent relative to the outgoing Mercedes-Benz SL-Class, the company says. Its resistance to bending in the middle is said to be 40 percent better than that of the AMG GT Roadster.

Grille shutters are nothing new, but Mercedes claims the Airpanel on the 2022 Mercedes-AMG SL breaks some new ground by controlling two openings. This allows better tailoring of the airflow to suit the demands of the car’s three distinct cooling circuits. These circuits variously regulate the temperature of the engine block and heads, turbochargers, transmission, intercoolers, engine oil, cabin heating, and engine control unit. Naturally the underbody is almost completely covered and smooth, there’s an active rear spoiler that adjusts to six positions, and the car features aerodynamically honed wheels. An optional aero upgrade package is available for the SL63 that includes a more aggressive front splitter and flics (canards/dive planes), plus active underbody aero and a larger rear diffuser.

All 2022 Mercedes-AMG SL-Class cars get a new five-link front suspension, which for the first time since the SLS Electric Drive packages the knuckle and all ball joints within the wheel rim to help lower the front hood (most front suspensions package the upper links or control arm inboard of and above the tire). Base SL55 models get steel springs that undergo a new heat treatment process that gives them the performance of a larger, heavier spring. Gluing the spring pad to the spring eliminates galvanic corrosion and wear from road abrasion. Variable-thickness anti-roll bars further reduce weight by 4-6 pounds. Adaptive damping is also standard.

McLaren was first to provide hydraulic roll control via suspension cross-linking, then EV manufacturer Rivian introduced it, and now Mercedes comes along with AMG Active Ride Control. Valves connect the adaptive dampers from opposite sides of the car in such a way as to allow fluid pressure from a compressing strut to be used to help reduce rebound in another strut. This keeps the car level during cornering, while eliminating the mass of steel anti-roll bars and the head-toss effect they can induce when a single wheel hits a bump. The system requires little or no energy input, so it’s highly efficient, and by adding a small pump, the same plumbing can be used to elevate the front of the car by 1.2 inches to clear driveways and the like.

A separate electromechanical steering actuator fitted to each side of the rear suspension applies up to 2.5 degrees of rear steering. Turning opposite of the front wheels helps shrink the turning-circle diameter from 43.0 to 40.4 feet, while at higher speeds steering the rears in the same direction as the fronts increases stability. Cars fitted with this system get a lower, more direct steering ratio of 12.8:1, down from 14.2:1 without it.

In order to optimize cooling, the cooling vanes on the front brakes are spiral shaped, and the perforations are angled to take advantage of this. For this reason, the left and right front discs are different. A new pin design joins the steel rotor to the aluminum center in a way that further optimizes cooling. The rear discs are not handed, and carbon ceramic brakes are optional.

Will This Be the Hottest Mercedes SL Since the W198?

Despite putting on a few pounds and sprouting rear seats, the new R232 2022 Mercedes-AMG SL looks likely to rank as history’s best-performing SL model. But we’re more eager to learn whether all the electronics and traction-enhancing all-wheel-drive hardware can deliver those big performance numbers and driving satisfaction to boot. 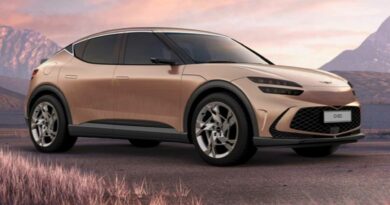 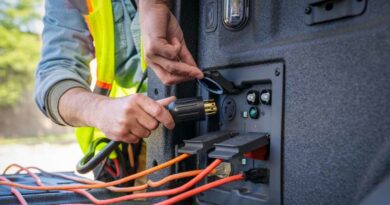 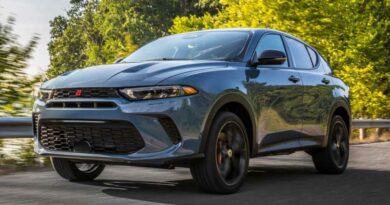