You’re looking at the 2022 Lexus NX, the next-generation compact luxury crossover that has not been officially revealed yet. Instead, the new NX crashed onto the internet by way of a video Lexus seems to have accidentally posted and which was subsequently copied, screengrabbed, and the like as it bounded around the internet.

Today’s first-generation NX was the first SUV Lexus created to sit beneath its pioneering RX, the hugely popular luxury crossover that created the luxury crossover segment back in 1999. Introduced for the 2015 model year, the NX brought RX style to the subcompact SUV space, borrowing some Toyota RAV4 bits for its underpinnings. Based on these leaked images of the second-generation NX, we suspect the RAV4 link to continue—this time using the current RAV4’s modern TNGA architecture.

The RAV4 connection should ensure the new NX grows somewhat, a welcome development given the current Lexus’s somewhat tight interior. As before, the Lexus NX wears expressive styling, combining the most eye-catching styling elements from Lexus’s products on one of its smallest products. (The automaker also sells the even smaller UX pseudo SUV.) Lexus designers drew some inspiration from the UX, evidenced by the NX’s similar full-width taillight treatment and low-slung appearance.

While the NX pictured here appears to be an F Sport trim, with sportier accoutrements and a shovel-style front fascia that juts out authoritatively at the chin, we surely hope the non-F-Sport model loses the current version’s goofy-lookin’ front overbite. Our understanding is that Lexus, keen to lend the car-based NX some semblance of off-road credibility, scooped out most of the lower bumper to improve clearance, but boy, does it look weird.

The Lexus-signature hourglass-shaped grille is present and accounted for, and even larger, it seems, than the piece on the outgoing NX. But aside from the mouthier front end, the NX overall seems more mature and substantial.

An Improved Inside Game

Lexus has implemented much bigger changes inside the NX, where the old model’s tombstone-like infotainment display, which poked out the top of the dashboard, has been traded for a notably larger and better integrated unit. The best news? The display appears to be a touchscreen, meaning the current NX’s irritating and fiddly touchpad control interface is dead and gone. On the current NX, this works like a laptop’s touchpad, where the user moves an on-screen cursor using a pad on the center console, with the arrow locking onto menu options briefly and providing haptic feedback as you swipe past them. It sounds simple enough, but the system is incredibly frustrating in practice. Good riddance.

We also spot some big round knobs for adjusting the cabin temperature, touch-sensitive controls for vent settings, and a digital gauge cluster display. The vibe remains modern and tech-heavy, but usability seems to be on the increase in the 2022 NX. One item we do hope makes a comeback is the current NX’s small removable mirror in the center console—it’s a total non sequitur, which the automotive world needs more of.

Engines are a mystery at this point, but look for front-wheel drive to be standard and all-wheel drive to be optional. Gas and hybrid four-cylinder options are all but guaranteed, possibly mimicking the RAV4’s choices, and we expect an NX300 or NX350 plus an NX350h to hit U.S. shores. (The version in the video is badged NX200, which is unlikely for America. ) The RAV4 Prime plug-in hybrid’s powerful 302-hp, all-wheel-drive setup seems like a contender. We’ll find out for sure whenever the NX is formally debuted. Given how it looks ready to go, that official reveal is likely coming soon. 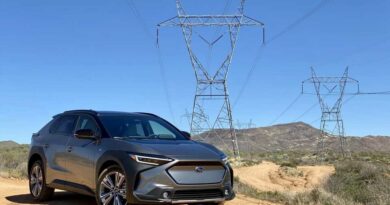