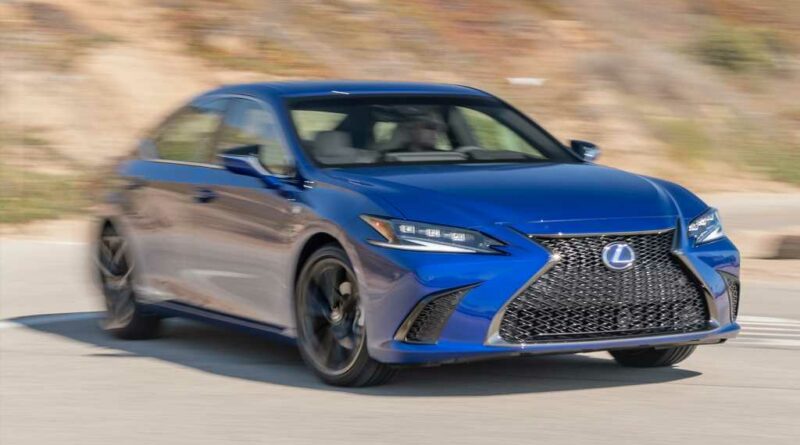 While the mighty 472-hp IS500 F Sport Performance steals the Lexus spotlight these days, a very different F Sport model quietly offers twice the efficiency, albeit with half the horsepower. Completing the Lexus ES trio of F Sport-ified sedans, the new 2022 ES300h F Sport hybrid represents a middle ground between the ES250 and ES350. More powerful than the 203-hp ES250 but less capable than the 302-hp ES350 with its new adaptive variable suspension, the ES300h F Sport aims to prove it’s more than just a collection of F badges and the intense Ultrasonic Blue paint.

The ES300h F Sport is for buyers who understand there’s more to performance than just face-melting acceleration. Like other 2022 Lexus ES300h hybrids, the F Sport model makes a combined 215 hp from its 2.5-liter I-4 and electric motor, and as is the case with the ES350, no AWD option is available. Even so, the new variant is otherwise equipped to impress, with a mildly refreshed exterior and interior updates that include bolstered seats and a black headliner as well as aluminum trim and pedals. Performance upgrades come in the form of a specially tuned suspension and gloss-black 19-inch wheels, which are wrapped in 235/40R19 Michelin Primacy MXM4 all-season tires. That’s slightly more aggressive than the 235/45R18 Michelin Energy Saver all-season tires on the last ES300h we tested.

“Slightly more aggressive” is a great way to describe the ES300h F Sport in general. Nothing about this Lexus yells performance; it’s more of a whisper—appropriate for the ES sedan’s approach to luxury. On the track, the 2022 ES hybrid’s as-tested 7.3-second time isn’t bad, depending on what you’re stepping out of. That’s a half-second quicker than the 2019 ES300h we tested and about a second quicker than the ES250 AWD.

Against everything else, however, it falls short. Its ES350 V-6 stablemate hit 60 in about 6.0 seconds in our testing, as did BMW’s plug-in hybrid 530e. Dare to dip into the world of non-luxury cars, and the Honda Accord Hybrid beats the Lexus, too, with a 6.7-second time to 60. True, acceleration isn’t the point of hybrids, but in this increasingly electrified age, our standards have changed—and yours should, too. Bottom line: The ES300h F Sport’s hybrid-assisted acceleration provides a satisfying boost off the line, but we’d argue it should be a bit better.

Where the ES300h F Sport came alive was on the figure-eight course, a MotorTrend-exclusive test that evaluates acceleration, handling, braking, and the transitions in between. Despite being smoked in this test by most of the cars above, the real story here is that the ES300h F Sport’s 27.1 seconds at 0.63 g (average) is a big improvement from the 2019 ES300h’s 28.4 seconds at 0.60 (average).

“It won’t be mistaken for a sport sedan, but it is surprisingly better than I anticipated,” road test editor Chris Walton said after track-testing the Lexus. “The steering is reasonably accurate and weighted appropriately.” Both in acceleration and figure-eight testing, the ES300h’s performance suffered once the battery fell to below half a charge. That’s when the hybrid is subjected to a level of aggressive performance driving you probably won’t ever match, but it is worth noting given this is an F Sport-badged car.

Off the track, we found the ES300h F Sport to be an easily maneuverable midsize luxury sedan, with decent steering feel and smooth acceleration. That’s better than the previous car, which we called “busy and floaty” over poor surfaces and “soft and fluffy” overall. The 2022 ES300h F Sport strikes a better balance. It feels comfortable and retains enough body control that the car never feels clumsy on winding roads. In other words, it’s what you’d expect from a car wearing both “ES” and “F Sport” badges.

Anyone accustomed to the brake feel of a non-hybrid or the great pedal tuning of cars like the Accord Hybrid will have to get used to the ES300h. Specifically, we’re talking about the final portion of braking when you enter your driveway or parking space, or when you edge forward in a left turn lane. Many drivers will have no problem learning to live with it, but it’s a compromise you shouldn’t have to make with a $50,000 luxury sedan.

How the Interior Beats the German Competition

Although the 2022 ES retains the dreaded touchpad that’s being phased out of new Lexus vehicles, the infotainment system boasts a couple key advantages over the Mercedes-Benz E-Class, our 2021 Car of the Year. First, the ES offers a couple ways to change the audio track with one touch, something that sounds insignificant until you spend thousands of miles behind the wheel of a car that doesn’t. The Lexus also uses its 12.3-inch touchscreen in a smarter way by displaying Apple CarPlay on the full display. (Android Auto is also standard.) Oh, and for 2019-2021 ES owners scratching their heads at how the average driver could possibly reach that display, Lexus moved the touchscreen 4.3 inches forward for easier access.

The cabin as a whole should impress anyone coming out of a Toyota or Honda but will probably leave E-Class or 5 Series owners with mixed impressions. They’ll likely appreciate the soft leatherlike material on the inside of the door pulls as well as the quality of the NuLuxe leatherlike trim, but they’ll find the F Sport’s otherwise cool sliding instrument cluster gauges dated in size and graphic sharpness. (For those scouring the configurators, a 360-degree camera system is available on the 2022 ES300h, but not on the F Sport model.)

But when you step into the back seat, the Germans simply can’t compete. The Toyota Avalon-based Lexus ES offers tons of rear seat space—a huge advantage over the E-Class, 5 Series, and the rest of the compact luxury sport sedan set.

The 2022 Lexus ES300h offers superb efficiency and driving range at up to 43/44 mpg city/highway, an incredible improvement over the ES350’s 22/31-32 mpg. That’s also slightly better than the Accord Touring Hybrid’s 44/41 mpg. Head out on the highway, and you’ll probably need refueling before the ES300h does. The car’s highway driving range comes to 581 miles, a huge jump over the ES350, which tops out around 500 miles, and the Accord Touring Hybrid’s 525 miles.

What those numbers can’t match, however, are what cars like BMW’s plug-in hybrid sedans can offer in around-town driving. The 330e, which starts around $44,000, manages a 22-mile all-electric range before the gas engine turns on. (The 530e is good for 21 miles.) In other words, anytime you finish all your driving in 22 miles or less, you can recharge at home and avoid using a drop of gas. Lexus doesn’t offer a plug-in hybrid, but the hybrid system is quiet most of the time. Without trying, it’s easy to reach 15 mph before the engine turns on.

The Lexus ES is a segment straddler—a big midsize luxury sedan that’s priced like a compact. It’s why we suggest ES300h F Sport buyers also try the two BMW plug-in sedans and the E450 sedan. Although the Mercedes lacks the efficiency of the Lexus, it’s engineered with world-class engine refinement and quietness. But then again, Mercedes doesn’t offer a sedan under 88 grand that can match the rear-seat space of the ES. Then there’s the Honda Accord Hybrid. What the Accord lacks in brand-name cachet it makes up for almost everywhere else. It’s a great car, and as a bonus, choosing the Honda means you’ve basically saved enough for a European vacation.

Even the temptation of Honda + vacation might not satisfy those set on a Lexus. Nearly 50 percent of all ES owners are trading out of an older ES, according to Lexus.

For those buyers, they’ll find a hybrid model with real appeal and—thanks to the new F Sport model—a driving experience that’s sportier by one or two notches. If you had no idea that the ES350 makes 302 horsepower or don’t care, we suggest test-driving the ES300h. Despite the low-speed brake feel and a couple other niggles, the ES300h F Sport justifies its place in Lexus’ lineup. Pricing on the 2022 Lexus F Sport models starts at $46,525 regardless of engine, encouraging higher consideration of the hybrid if you’re set on the sportier look. It’s more than just an updated design, though. With the ES300h F Sport, the car will feel sportier than any ES Hybrid made so far, more premium than an Accord, and a value to German-car customers not expecting a sport sedan. 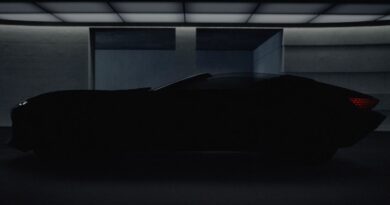 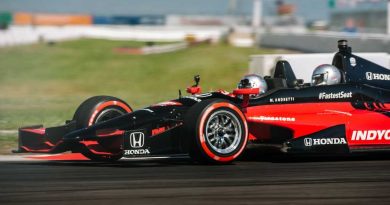 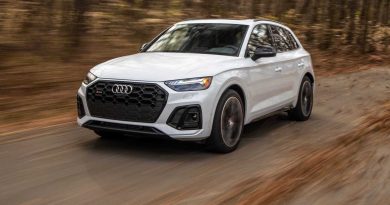