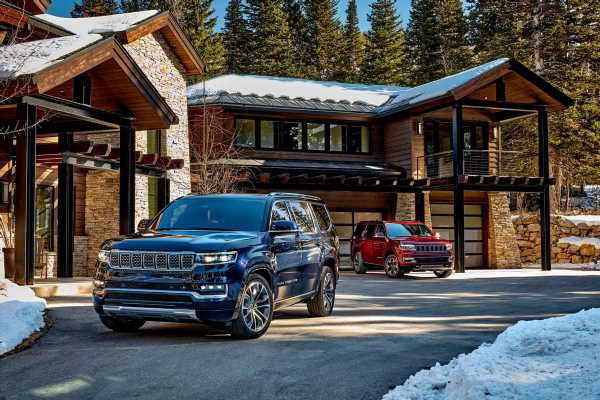 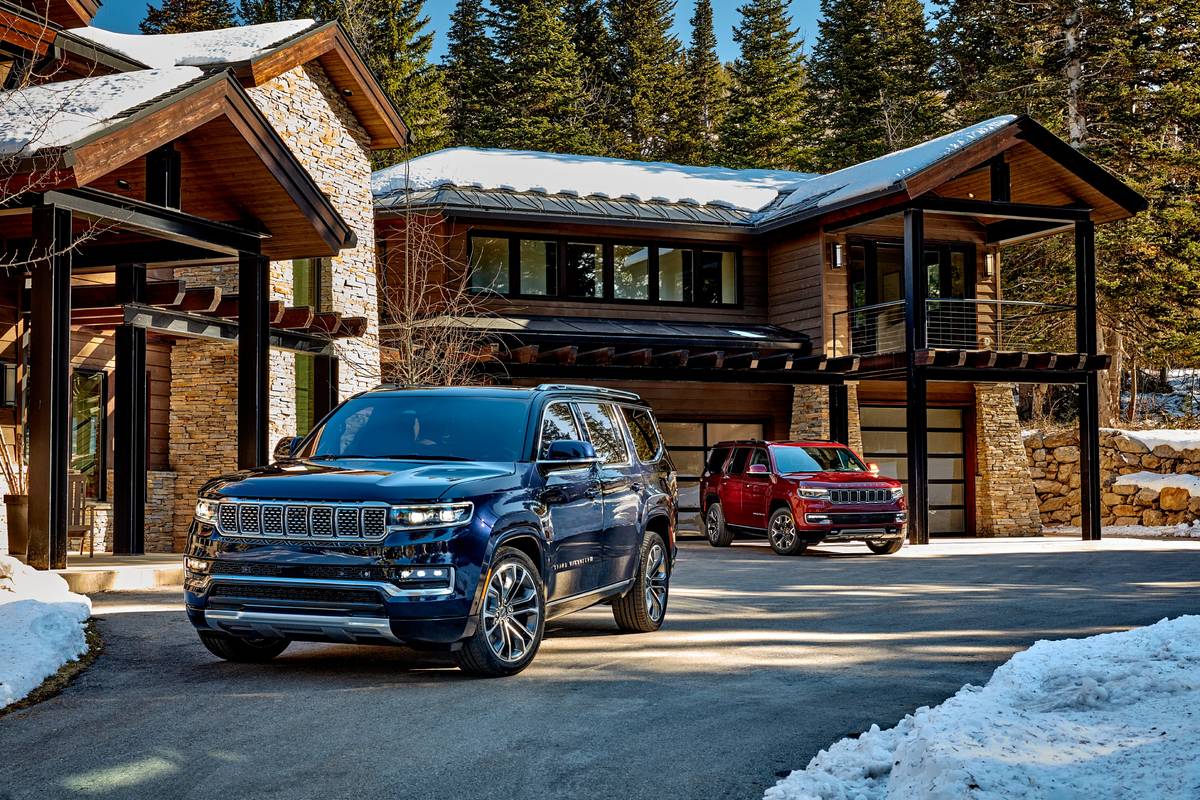 Looks like: Nearly identical to the concept we saw last year; a bigger and beefier Grand Cherokee L

The next Jeeps to join the automaker’s lineup of SUVs are the Wagoneer and Grand Wagoneer: powerful three-row, body-on-frame SUVs. And, while both trace their lineage back to the last Jeep Wagoneer, neither one will wear a single Jeep badge.

Instead, Jeep is creating the Wagoneer sub-brand — similar to Hyundai’s Genesis brand — that Jeep says  will develop into “a portfolio of vehicles that redefines ‘American premium.’” The Wagoneer and Grand Wagoneer will open that portfolio, with the Wagoneer targeting less-premium three-row SUVs while the Grand Wagoneer (pictured in the gallery below) will try to live up to the “Grand” billing and go after luxury SUVs.

What’s the Difference Between the Wagoneer and Grand Wagoneer?

Both SUVs will share the same frame, eight-speed automatic transmission, maximum towing capacity of 10,000 pounds, dimensions and, aside from minor differences in exterior materials and badging, very nearly the same look. One key difference is under the hood, where the Wagoneer will be powered by a mild-hybrid 5.7-liter eTorque V-8 that produces 392 horsepower and 404 pounds-feet of torque. The Grand Wagoneer, meanwhile, will use a 6.4-liter V-8 with a substantial 471 hp and 455 pounds-feet. Jeep says the Grand Wagoneer will sprint from 0-60 mph in 6 seconds flat. The Wagoneer is available in rear- or four-wheel drive, while the Grand Wagoneer comes standard with 4WD.

Visual differences outside are more subtle. Badging will help distinguish the two (particularly whether it says “Grand” before “Wagoneer”), as the Wagoneer (pictured in the gallery below) wears its front badging above its chrome grille while the Grand Wagoneer’s badge is integrated into the chrome. The Grand Wagoneer also gets an available two-tone look with a black roof, and its Obsidian trim blacks out the exterior. Wheel choices for both are 20 or 22 inches depending on trim or option package.

If that’s not enough, the Grand Wagoneer has an additional 10.25-inch touchscreen below that for climate and seat controls, and optional on both (standard on preconfigured Grand Wagoneers) is another 10.25-inch touchscreen in the passenger-side dashboard. The front passenger screen can mirror a device via an HDMI cable and be used to control the built-in navigation system and rear entertainment and climate functions. To prevent driver distraction, there’s a special privacy filter over it.

We’ve already discussed the availability of Amazon Fire TV in both SUVs, but there are new details about the available entertainment options for rear passengers. Both SUVs will offer dual 10.1-inch screens, with a third 10.25-inch touchscreen for climate and seat controls between the captain’s chairs that are standard on the Grand Wagoneer and optional on the Wagoneer (both SUVS can be had in seven- or eight-seat configurations).

Both SUVs come with standard Nappa leather upholstery, but the Grand Wagoneer will also have higher-quality materials, including available Palermo leather and real metal or wood accents. Premium McIntosh stereos are also available in both the Wagoneer and Grand Wagoneer.

Fellow Stellantis family member Ram set a high bar with the interiors of its 1500 pickup — so high, in fact, that we named luxury trim levels of the Ram 1500 our 2020 Luxury Car of the Year. We won’t know for sure until we see a Wagoneer or Grand Wagoneer in person, but both SUVs aim to surpass that level of luxury, and they might succeed.

Besides the bevy of digital displays, both the Wagoneer and Grand Wagoneer will offer a variety of high-tech safety features including standard adaptive cruise control, automatic emergency braking with pedestrian and cyclist detection, blind spot monitoring and more. Both SUVs will also be available with a head-up display.

Beyond the usual roster of safety tech, however, are high-end features one would expect from a luxury vehicle. A 360-degree camera system is available on Wagoneer and standard on Grand Wagoneer. There’s also an available digital rearview mirror display that uses a rear-facing camera to display the view behind the SUV even if the traditional mirror’s view is obstructed.

Autonomous driving tech will also be incorporated into the Grand Wagoneer with the hands-on Level 2 Active Driving Assist feature; Jeep plans to upgrade that later to a hands-free version. As of now, Jeep says that hands-free Active Driving Assist will be available on “approved roadways,” which hints at a system more akin to GM’s Super Cruise than Tesla’s Autopilot.

Lest you think that Jeep would build a couple of luxury land yachts, don’t worry — both the Wagoneer and Grand Wagoneer will offer some off-road capabilities, as well. Neither vehicle is Trail Rated — Jeep’s off-road brand standard — but the available or standard four-wheel drive should give owners some confidence once the pavement ends (or gets covered in snow).

The Wagoneer will come standard with either Jeep’s Quadra-Trac I or II 4WD systems depending on trim level. The more advanced Quadra-Drive II system, with a rear electronic limited-slip differential, is optional on Wagoneer and standard on Grand Wagoneer. Models with either Quadra-Trac II or Quadra-Drive II also get the Selec-Terrain traction management system with five different settings: Auto, Sport, Rock, Snow and Sand/Mud.

The Grand Wagoneer also comes standard with Jeep’s Quadra-Lift air suspension, which provides adjustable ride height, lowering the vehicle for easier entry or raising it to improve ground clearance. Normal ground clearance is 8 inches, and it can be lowered 1.6 inches when parked or raised up to 2 inches. An Aero setting also lowers the vehicle 0.6 inches at higher speeds or when Sport mode is selected for improved aerodynamics.

Preorders for both vehicles open Thursday, with units arriving at dealerships in the summer.

Editor’s note: This story was updated March 11, 2021, to clarify the availability of the 10.25-inch touchscreen in the passenger-side dashboard. 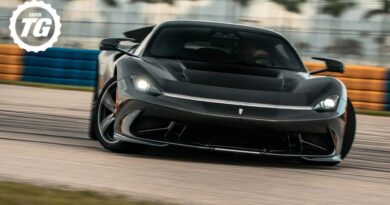 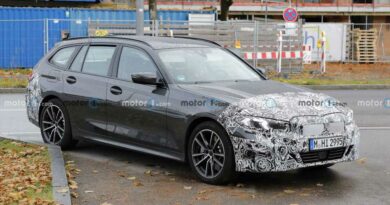 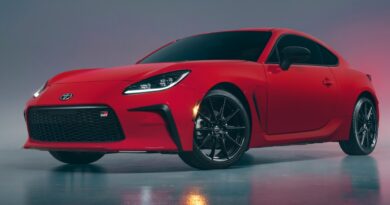