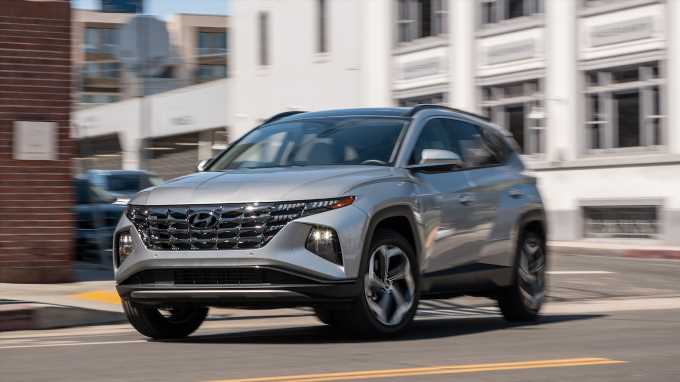 Ever notice how gorgeous people can often be socially awkward or clumsy? Science suggests this awkwardness is cultivated over a lifetime of reacting with strangers who behave oddly when their own brains’ left ventral tegmental area produces dopamine triggered by the presence of the attractive person. The 2022 Hyundai Tucson is undeniably attractive, from its novel LED headlamps (camouflaged as smoked chrome grille elements until illuminated) to its chiseled flanks, coupe-like roofline, and vaguely Mustang-like taillamps. Might its beauty have triggered sufficient dopamine production in the engineers who created it to render this pretty compact SUV awkward?

As undeniable as its fashion-forward design is the fact that the 2022 Hyundai Tucson is underpowered relative to the broader compact SUV class. Whether equipped with the naturally aspirated 2.5-liter or the 1.6-liter turbocharged hybrid, its power-to-weight ratio ranks it in the bottom half of compact SUVs. Its 0-60 mph and quarter-mile times (9.3 seconds and 17.0 seconds at 83.6 mph) bear this out, as they place our 2.5-liter Limited example in the basement among 12 similarly priced small SUVs. That’s pretty slow, but nobody in this market is looking to race for pink slips, so who cares?

It’s more the awkwardness of the acceleration that is off-putting. There is a nonlinearity to the car’s thrust that is difficult to explain with no turbocharger spooling up, no electric motor providing assistance that may fade out, and no continuously variable gear ratios in play. This is a simple setup: a big-lunged naturally aspirated four-cylinder pulling through an eight-speed automatic. Why the lumpy power delivery? An aggressive fuel-economy calibration in the default Normal powertrain drive mode makes the transmission stingy with its downshifts, adding to the gawkiness. You depress the pedal in search of acceleration and perhaps get one downshift that inevitably proves insufficient, causing you to dig deeper into the pedal’s travel for another big downshift and only then do you get the acceleration you originally expected. Sure, engaging Sport cures the transmission’s programming ills, but to earn its 24/29/26-mpg city/highway/combined EPA ratings, the Tucson always defaults to the miserly Normal mode.

The 2022 Hyundai Tucson Limited performed well on our vehicle dynamics tests, ranking near the top of its class in terms of overall lateral grip (0.82 g average) and with a figure-eight performance of 27.4 seconds at 0.61 average g. The latter that bests small SUV stalwarts like the zoomy Mazda CX-5 Turbo and the top-selling Toyota RAV4 Limited and Nissan Rogue. Braking performance ranks right near the top, too, at 118 feet from 60 mph, trailing only the Nissan Rogue (116) and Subaru Forester (117).

Occupants pay a price for some of this dynamic performance, however. “The Tucson has far and away the stiffest suspension in its competitive set,” features editor Scott Evans said. “It’s not harsh, but it’s very obviously firmer than any of the others.” We would argue that a slightly softer-riding suspension that posted somewhat lower handling performance figures might better match the vehicle’s more “relaxed” acceleration, not to mention market expectations.

A Lot of SUV for the Money

There’s nothing awkward about the interior design and feature content of the 2022 Hyundai Tucson Limited. As MotorTrend buyer’s guide director Zach Gale said: “Once again, Hyundai wins for features-per-dollar value. You’ve got an enormous glass roof, the Hyundai Smart Park feature, heated and ventilated front seats, a digital instrument cluster, and heated rear seats. There’s a lot here for $37,500.” The swath of cloth that continues from the doors across the dash is pleasing to the eye and underlies a cool unique selling proposition of the Tucson: diffuse mode ventilation. Climb into the car hot, and you want (and can get) a strong stream of cooling air on your face and upper body, but once you’ve reached a comfortable temperature, pressing the Diffuse button redistributes the vent-register air through small holes that span between the central and outboard vents. This mode never dries out your eyes.

The new Tucson is also a physically large compact SUV. Inside and out it ranks in the top third among its competitive set, dimensionally, with the largest rear passenger volume (52.2 cubic feet) and the most cargo space behind the rear seat (38.7 cubic feet). The cargo area features seat-back releases, a floor that can be repositioned a bit lower, and a 12-volt outlet, though it lacks bag hooks, a standard cargo shade, and some other conveniences.

Somehow this vehicle had a way of pushing our buttons. The driver attention monitoring system, for example, once suggested we “consider taking a break” just 15 minutes into a journey, simply because we’d crossed lane markers twice to avoid road hazards. It frequently hectored us to “place hands on steering wheel” when they already were. Sometimes the transmission failed to engage drive on the first press of the button, but if you then pressed it more than once the screen chided, “gear already engaged.” We found ourselves shouting at the Tucson a fair amount.

This SUV is certainly not for everyone, but then no vehicle is. Fashion-forward early-adopter types who are patient by nature and seldom in a big hurry will be most easily pleased by its many aesthetic and sybaritic charms. And most of our complaints with the Tucson seem like easy tuning fixes, so we look forward to a future test of a possibly revised version. But for now, more discerning drivers may agree with Scott Evans, in that “the Hyundai’s daring design and rich feature content are offset by a somewhat disappointing driving experience,” and hence be happier with the Honda CR-V or Mazda CX-5. 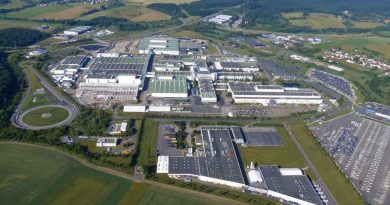 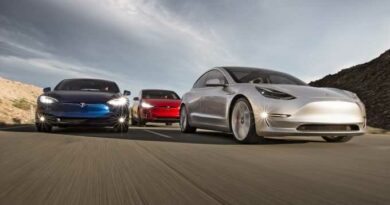 How Much Is a Tesla? Here’s a Price Breakdown of Each Model