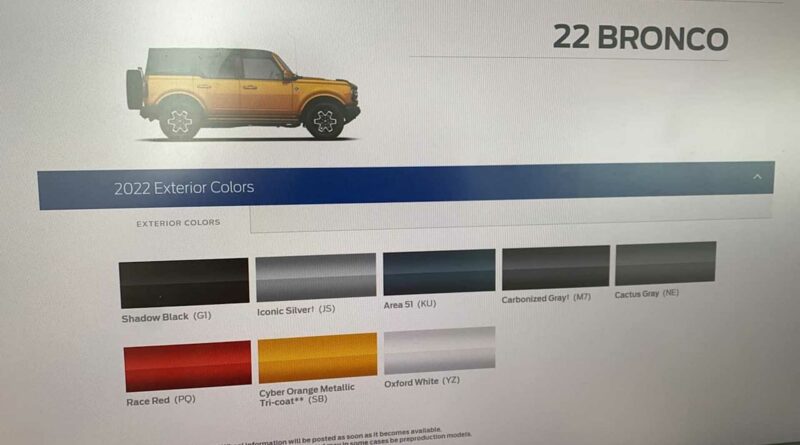 In June, Ford Bronco production kicked off for the 2021 model year after the model’s rollout suffered several delays. While it’s finally beginning to reach customers – and it’s not all sunshine and rock climbing – Ford is already looking to the 2022 model year that’s fast approaching. A leaked image from Bronco6g.com purports to show what exterior colors will be available on the off-roader, and the palette will look a bit different.

It appears the Bronco is losing three colors in addition to the first-year-exclusive Lightning Blue on the First Edition Model. Antimatter Blue, Velocity Blue, and Rapid Red are missing for 2022. That leaves the SUV with Shadow Black, Iconic Silver, Area 51, Carbonized Gray, Cactus Gray, Oxford White, Race Red, and Cyber Orange Metallic Tri-Coat available. The loss of Velocity Blue feels like the biggest loss as it is a stand-out color among the darker-shaded offerings.

Missing from the color lineup is a shade of green Ford confirmed earlier this year would arrive for the 2022 Bronco. There’s no green listed, though that doesn’t mean it couldn’t show up later or on a special edition model, though its omission is concerning. Ford was also rumored to add another shade of yellow called Yellowstone, though that’s not listed either. The reduced color selection could be a cost-cutting measure for the model as it has suffered several hiccups on the road to production that’s put it behind Ford’s intended schedule.

It’s not clear when Ford plans to switch from producing the 2021 Bronco to the 2022 one, though the Bronco’s delayed production start likely means we are still months away from seeing the 2022 model roll off the assembly line. The Bronco’s color shakeup isn’t surprising as the Rapid Red and Antimatter Blue have similar shades available, which remain for 2022. We’ll keep our eyes peeled for the elusive green the Bronco is supposed to get, though. 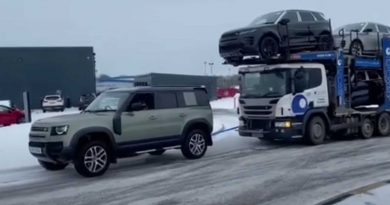 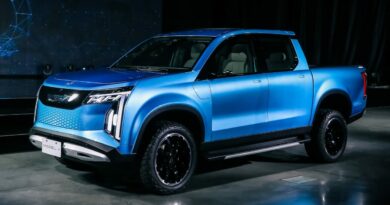 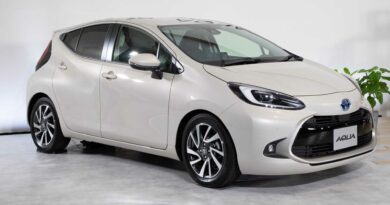