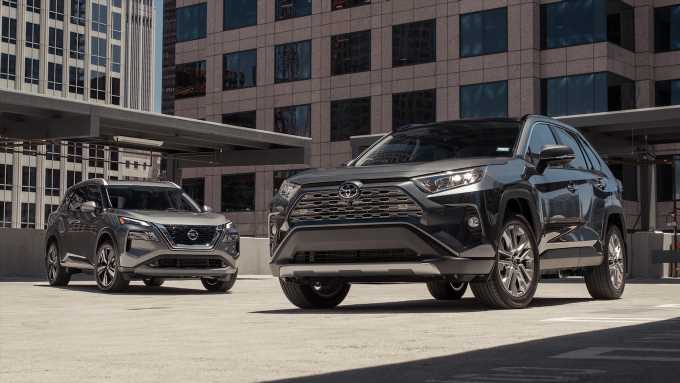 No matter how many times MotorTrend trumpets the all-around goodness of the Honda CR-V, some people are determined to shop elsewhere. One stumbling block is likely the CR-V’s small 7.0-inch touchscreen that loudly calls attention to the SUV’s age. If that tech makes the Honda a no-go, then the search likely expands to two other popular compact SUVs: the Toyota RAV4 and the Nissan Rogue. The RAV4 lineup offers remarkable breadth and style, but don’t overlook the Nissan. The new Rogue is good. Really good.

Redesigned for 2021, the Rogue attacks this segment with an enthusiasm for details we haven’t seen from Nissan in years. But can it measure up to the Toyota? The standard (non-hybrid) RAV4 hasn’t been a MotorTrend favorite, but the Toyota features a compelling design, not to mention more traditional strengths such as expected reliability and long-term value. To determine which SUV is the better buy, we’re focusing on the high-end models, matching a 2021 Nissan Rogue SL AWD against a 2021 Toyota RAV4 Limited AWD. Here’s what we found.

Even for a compact SUV buyer who doesn’t care about cars, driving experience still matters. No one wants an SUV that can’t deliver a comfortable ride or enough power to easily climb a hill. Here, the Nissan Rogue is a solid player.

“Hats off to Nissan for an incredible step forward with the new Rogue,” features editor Scott Evans said, echoing comments made by other judges. “If nothing else, it wins the ‘Most Improved’ award. The Rogue has really come a long way in just one generation.”

No kidding. In a 2019 comparison, we called the previous-gen Rogue’s dynamics sloppy and found the steering heavy and unresponsive. In contrast, the 2021 Rogue earned a spot as an SUV of the Year finalist, and we’re still impressed—mostly.

The Rogue’s continuously variable automatic transmission (CVT) is almost as good as the CR-V’s, though the Nissan’s transmission occasionally exhibits a lumpiness that’s in contrast to the smoothness CVTs are expected to deliver. Despite that drawback, it’s a clear step up from the automaker’s previous efforts; more refined and less lethargic than before. That transmission is paired with a 181-hp 2.5-liter naturally aspirated I-4 that makes adequate power, enough to deliver a MotorTrend-tested 8.5-second sprint to 60 mph.

On the track, road test editor Chris Walton found the Rogue’s steering to be precise and enjoyed that it actually offered some steering feel. He was less complimentary about the RAV4. Still, the Toyota impressed some judges when driven at a slower pace on our test-drive loop.

Associate editor Eleonor Segura found that although the engine noise was annoying, the RAV4 was fun to drive. “It goes around corners smoothly,” Evans added, “and in a very controlled manner for an everyday consumer vehicle.”

In this duo, the RAV4 wins the race to 60 by just two tenths of a second, but if you want to win a stoplight drag race, try the RAV4 Hybrid or RAV4 Prime. What bothers us about the Toyota’s engine is that it’s simply too loud and unrefined. The Nissan also sounds hoarse at wide-open throttle, but the issue is more pronounced in the Toyota.

In terms of ride quality, neither of these SUVs can compete with the segment leaders. If smooth suspension tuning is a top priority, consider the Subaru Forester or Honda CR-V. Both the RAV4 and Rogue test SUVs feature 19-inch wheels and ride a bit firm, maybe too firm for two vehicles that don’t offer much sporting pretension.

The Toyota RAV4 and Nissan Rogue really begin to diverge in design. And we’re not just talking about exterior styling, as some of our judges preferred the Rogue’s futuristic and angular looks, while others were smitten with the RAV4’s rugged appeal. Dig a little deeper, and you can guess where each automaker spent extra development time.

The RAV4’s interior is just as delightful today as it was in the 2019 model year when this generation arrived. Toyota rewards buyers with rich details you simply can’t find anywhere else. The grippy material behind the interior door pull is functional and speaks to a sense of quality. That rubbery material also appears on a pair of giant center-stack knobs, furthering the rugged appeal.

We appreciated the Toyota’s attention to detail, down to the star-like shape that appears on the speaker grilles, the bottom of the cupholders, and even the front passenger’s tray. These are neat features that Toyota didn’t have to do, but which look good. Drivers may not notice all of these items right away, but down the road, such decor is sure to generate pride of ownership.

The Nissan fights back with a mastery of practical engineering. Wide-opening rear doors make entry and exit easy, whether you’re installing a child seat or getting Fido to jump in the back seat. You won’t find that in the RAV4, nor will you find any controls in the cargo area to fold down the rear seats, as there are in the Nissan. The Rogue’s flexible cargo area also features built-in dividers and a two-level cargo floor.

“There is so much to like inside,” Segura said. The Rogue’s many soft-touch surfaces are great, and the Nissan also has some of the most comfortable front seats you’ll find in any SUV under $50,000. A storage area underneath the center console is smart and helpful, if not quite as good as the one in the CR-V. No one needs any of this stuff, but owners will love the options Nissan provides, and we’ve taken notice.

Rear-seat climate controls are another Nissan-only feature in this pairing, as is a 9.0-inch touchscreen. The Toyota’s maxes out at 8.0 inches (the Prime offers a 9.0-inch unit). We expect the 2022 RAV4 to offer updates in screen size and possibly software, too. Both SUVs include digital screens within their instrument clusters, but the Nissan’s is better executed and more flexible. The Nissan’s central air vents could use a redo, however, as the tab controls are a little hard to grasp due to the way the dash juts out.

Thus far we haven’t addressed the $40,351 elephant in the room. Yes, the as-tested price of our 2021 Toyota RAV4 Limited AWD crested $40,000. Our test SUV was well equipped, with LED headlights, a power liftgate, heated and ventilated front seats, a panoramic glass roof, wireless phone charging, an 11-speaker upgraded sound system, and a 360-degree-view camera system. Except for a power passenger seat (an unfortunate omission at this price), this Toyota has almost everything one could want.

When it comes to features per dollar, though, the Nissan has the Toyota beat. Our 2021 Rogue SL AWD came to $36,705 and includes a panoramic moonroof, a 360-degree-view camera system that’s a little easier to use, and a power passenger seat. Splurge with the more expensive Rogue Platinum, and you get quilted leather seats, a 12.3-inch digital instrument cluster (not offered on the Toyota), and a few other upgrades—and still save more than $1,000. Those savings would more than compensate for one key point in the Toyota’s favor: two years or 25,000 miles of complimentary maintenance.

Where the Toyota claws its way back is with the brand’s hard-earned reputation for reliability and long-term value. We’re talking about resale value as well as maintenance and repair costs. We trust the experts at IntelliChoice with these calculations, and Nissan has some work to do here. The Rogue is rated Mediocre, the second-lowest of five possible ratings, versus the RAV4’s Good rating, which is second from the top.

Perhaps an even greater issue with the Nissan is its seemingly conflicting safety ratings. Automakers try to get the best safety ratings from various testing organizations around the world. Although the Rogue earns a commendable 2021 Top Safety Pick+ from the Insurance Institute for Highway Safety (IIHS), the same SUV’s four-star overall rating from the National Highway Traffic Safety Administration (NHTSA) is tied with the aging Jeep Cherokee for a worst-in-class performance. The RAV4 earns five stars overall in NHTSA testing, but its four-star frontal test result trails the five stars of its Honda, Subaru, and Mazda rivals.

RAV4 vs. Rogue: Which One Is Better?

When your shortlist is down to the Nissan Rogue and Toyota RAV4, determine which shortfalls you can live with. The Nissan’s safety ratings aren’t consistently good across both testing agencies, and, at least with 19-inch wheels, there’s a firmness over road imperfections that’s tolerable but not ideal. The Toyota’s ride also isn’t buttery smooth, and it lacks the smart practical touches we appreciate in the Rogue.

Both SUVs offer spacious cargo areas, 36.5 cubic feet in the Nissan’s case and 37.5 for the Toyota. Efficiency and driving range are similarly close, with the AWD Nissan coming in at an EPA-estimated 25/32 mpg city/highway to the Toyota’s 25/33 mpg. Go on a long road trip, and you’ll get around 470 miles of highway driving in both SUVs, a respectable showing that beats most competitors (except the Subaru Forester, which provides more than 500 miles).

So, the specs don’t determine a clear winner. This is a close matchup, but between the two, the Nissan is the better all-around performer. The tech is better, there are more practical touches inside, and it’s at least as well equipped as the Toyota yet costs less.

“I think with just a little more polish, the Rogue has the potential to be a segment leader,” Evans said.

And against the Toyota at this price point, the Nissan is the better pick. 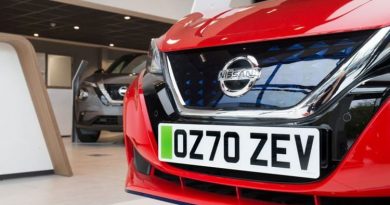 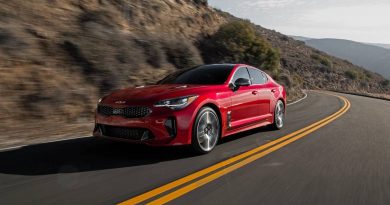 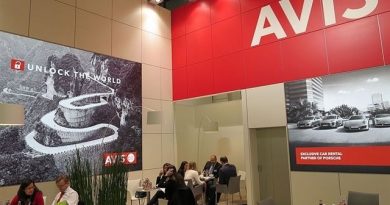