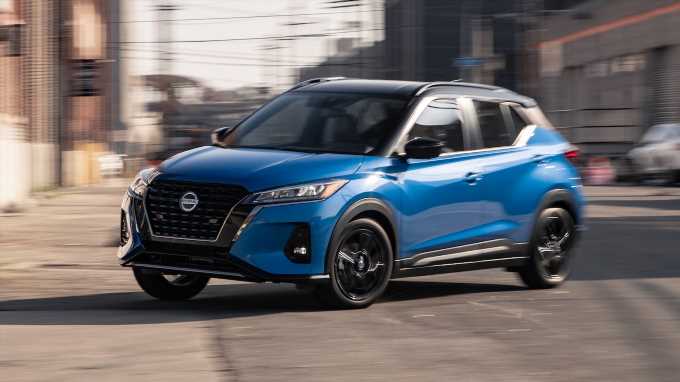 Consumer hunger for crossovers of all shapes and sizes has led automakers to respond to the demand by filling every niche imaginable with vehicles aimed to serve specific purposes. The Nissan Kicks is one such vehicle that does battle in the subcompact crossover segment, which contains nearly 20 vehicles.

We spent two weeks testing a 2021 Nissan Kicks SR on the heels of a recent refresh that added more standard content across the various trim levels, including disc brakes and an 8.0-inch touch screen in addition to other touches. We then put it through our testing regimen to see if these improvements were enough to keep the spunky CUV fresh for a new model year.

Slow Is the New Fun?

Our test car arrived in a two-tone paint job with the main bodywork covered in Electric-Blue Metallic and the accent pieces wearing Super Black. Black wheels came as a $495 option, while black mirror caps and roof rails are standard at this trim level. Whereas the late Juke’s exterior had a cute bug-like charm, the Kicks instead wears a more rugged look.

This Nissan Kicks SR’s 1.6-liter inline four-cylinder engine is good for 122 hp and 114 lb-ft of torque, which gets the Kicks from a standstill to 60 mph in a noisy 10.1 seconds. This is not a quick vehicle by any stretch, and its engine seems optimized for fuel economy rather than power. Under full throttle, the four-banger was fun to rev out all the way even if it did so noisily. Drivers who want to get places in any semblance of a hurry need to milk the drivetrain for all its worth given the rather paltry performance figures. Sport mode improves throttle response and forces the CVT to operate with shorter gearing, which turned out to be simply inefficient rather than helpful for extracting a more enjoyable driving experience from the car.

On the road, the Nissan Kicks SR boasts admirable suspension tuning that keeps body movements under control. On the track, our test editors also noted good body control on the figure-eight, a MotorTrend test that evaluates braking, cornering, acceleration, and the transitions in between. It can be a challenge to appreciate this facet of the car in the city or on the highway since road noise penetrates the cabin at any speed, a reminder that this is an economy car with no pretensions of luxury. However, the compact crossover proved fun to chuck through freeway ramps due to its diminutive size, 2,768-pound curb weight, and great visibility.

Steering is lifeless but direct becoming firmer and more precise in Sport mode. We weren’t impressed by the Kicks SR’s poor braking distances, but brake pedal calibration is reliable and predictable. Although the Kicks SR isn’t quick by any measure, its figure-eight time is almost identical to that of the Kia Seltos S FWD, one of its closest competitors in the CUV segment. However, most other rivals such as the Kia Soul and Hyundai Kona accomplish the same feat a lot quicker; the Kicks SR gave up a lot of time on the track because it wouldn’t fully disable its stability control.

The Kicks SR sends power to the front wheels via a CVT. Around town, the transmission is inoffensive and doesn’t make itself known to the driver with any discernable rubber banding. It’s a bit of a different story on the track.  Our test team noted some “dithering in the rpm” during acceleration while the Kicks SR was being evaluated, but it didn’t actually do any annoying fake shifts.

Even though the Kicks SR is officially classified as a subcompact crossover, its car-like nimbleness is matched with traditional hatchback practicality. Adults who need to ride in the back seat won’t be cramped, and the 25.3-cubic-foot trunk will swallow most grocery and errand pickups with the seat up. With the seats down the Kicks has 32.3 cubes of cargo space, less than its rivals. Still, we were able to accomplish a large donation and recycling run in one trip, so it’s enough space as long as the driver and passenger don’t have any kids or dogs in tow. At night, the upgraded LED headlights and high beams were welcome inclusions.

The SR trim adds a leather-wrapped steering wheel and gear selector knob. The synthetic leather seats are comfortable and supportive, and the same material covers other surfaces on the interior. It still leaves big portions of the plastic door panels visible, so not everything is upscale inside the cabin.

This Kicks SR had the Premium package installed, resulting in lots of cool tech features that give the driver extra convenience and safety. A 360-degree parking camera view is a highlight, as are the headrest-mounted Bose speakers that come as part of the Premium package. The Kicks driver enjoys a remarkably full-sounding stereo thanks to this inclusion. Empathetic drivers needn’t worry that their passengers will suffer from bad sound, though; the audio system sounds crisp and full even in the seats that don’t have their own headrest speakers.

Driver assistance technology erred on the sensitive side. For example, the lane departure warning often flagged traffic in the next lane over before the other car even entered the blind spot. Despite having a lot of useful safety systems, the lack of parking assist seemed like an odd omission given the otherwise high-tech suite of equipment, but some omissions are to be expected at this price point.

At an as-tested price of $25,260, this tricked-out Kicks has the goods to keep drivers satisfied, even if its powertrain and steering aren’t top shelf. The good news is that the Kicks SR isn’t terribly expensive at this price point, and its slow but predictable acceleration would make this a great starter car for new drivers. This refresh shows that Nissan is working hard to keep its cars appealing to prospective buyers, but the next update will have to be more substantial to fend off competitors. 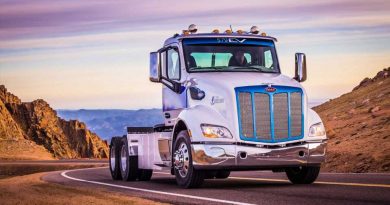 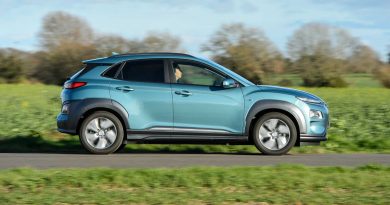 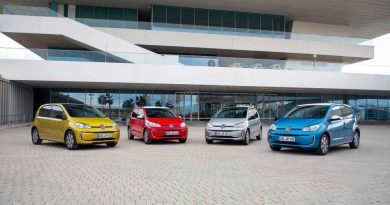