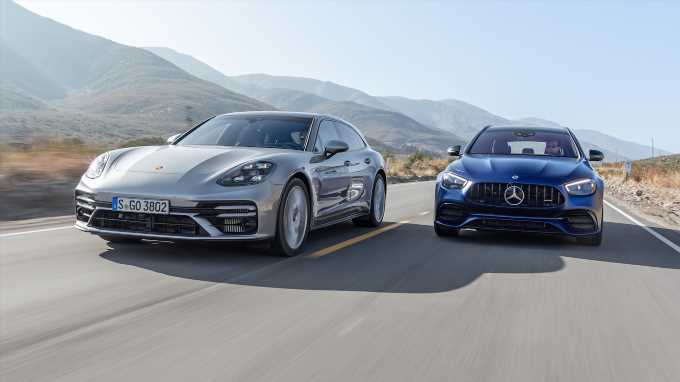 It’s a wonderful time to be an automotive enthusiast, but that time may be drawing to a close. So, covet, flog, or fantasize about the road-scorching 2021 Mercedes-AMG E63 S and 2021 Porsche Panamera Turbo S Sport Turismo wagons while you can. Hybrids and battery electric vehicles can produce equally impressive performances, too, and those segments are rapidly growing. It’s an automotive minute before midnight for this kind of twin-turbo V-8 internal-combustion excess, especially the long-roof wagon variety. So, let’s compare two of the best examples still extant.

The muscle wagon’s origins can be traced back to good ol’ American models stuffed with powerful muscle-car engines: The ’57 Chevy Nomad with the “283 Fuelie” might be the first, followed by the ’64 to ’67 Pontiac Tempest with a 326-cubic-inch high-output V-8 and ’66 Ford Country Squire with a 428 Cobra Jet, to name a few. More recently, Cadillac and Dodge dabbled with CTS-V and SRT Magnum muscle wagons, but they left these brilliantly lewd chimeras to the Germans years ago. This niche within a niche represents an unlikely and certainly endangered combination of attributes: a 600-plus horsepower twin-turbo V-8 and all-wheel drive integrated into an indisputably handsome and practical wagon body. These are, indeed, the glory days for this type of motoring, and perhaps its swan song as well.

Mercedes-AMG usually get credit for creating the modern muscle wagon with its luminary E55 wagon that arrived here in 2005. AMG’s “more power solves everything” mantra as applied to wagons has been winning the hearts of auto journalists ever since, even through multiple E63 successors. A super-sedan driving experience plus near-SUV levels of practicality in a stealthy wrapper is a formula we love. There’s something about the inherent cognitive dissonance, too, of driving a vehicle that looks like this should be on its way to pick up the kids from practice, not chasing down sports cars with ease. More on this below.

Currently, the five-seater E63 S wagon is fitted standard with AMG’s most advanced “4Matic+” all-wheel drive system and a twin-turbo 4.0-liter V-8 that produces 603 horsepower. Remember when 100 hp per liter was a big deal? And name another family hauler that comes with a dedicated, rear-wheel-drive “drift mode.” Points! The vestigial rear-facing third-row seats are no longer offered in the AMG, though, only in the slightly lifted E450 All-Terrain version.

In 2018, Porsche debuted the five-seat long-roof “Sport Turismo” body style, and we think it’s a dramatic improvement on the Panamera’s otherwise chunky fastback sedan looks, and better and sportier than the E63 wagon, to boot. There are already seven variants of the Porsche wagon, three of which are hybrids. This top-performing Turbo S comes standard with Porsche’s most advanced all-wheel-drive system, enhanced with side-to-side torque-vectoring “plus” and rear-axle steering. It also boasts a twin-turbo 4.0L V-8 but making an even more dizzying 620 horsepower.

Just How Fast Is Fast?

Weighing in at an SUV-like 4,658 and 4,823 pounds, respectively, the Mercedes-AMG and Porsche are incongruously quick—like, “you can’t believe this is happening” quick. The E63 S wagon has the latest AMG Speedshift MCT nine-speed transmission that uses clutches instead of a torque converter to connect engine and transmission. In the more aggressive drive modes, it cracks off speedy and abrupt (almost harsh) upshifts. In Race mode with its adjustable-rpm launch control, our best 0-to-60-mph time came from settling it at 4,000 rpm on the tach and releasing the brakes. The result is a 3.0-second sprint, as quick as the eighth-generation mid-engine Chevrolet Corvette Stingray Z51. Oh, the sound the AMG V-8 makes is just so arrogant and delightful. It never gets old.

The Panamera Turbo S Sport Turismo also effectively utilizes launch control, but with an eight-speed dual-clutch transmission instead. It’s upshifts are just as quick as the AMG’s, but much smoother, almost seamless. In Sport Plus mode, and before releasing the brakes, the Porsche revs to 5,000 rpm before leaping off the line and to 30 mph (a good indicator of how effectively a car launches) in 1.0 second, or 0.2 second ahead of the E63. The Panamera opens the lead to 0.3 of a second by 60 mph, doing the deed in a mere 2.7 ticks, and in the process beating a million-dollar McLaren Senna. We told you these wagons were incomprehensibly quick. Despite its optional sport exhaust system, what’s missing from the Porsche’s performance is the full-throttle full-throated braggadocio of the AMG. Regardless, the Turbo S Sport Turismo is the quickest wagon we’ve ever tested.

Both of these wagons feature sophisticated suspensions with air springs and three-way adjustable adaptive dampers that do an amazing job controlling body motions. The Porsche goes further with active anti-roll bars keeping it flat in the corners. Both are so buttoned down, and effortlessly so, that they make 100 mph feel like 50. Both have standard thermal/noise insulated glass, but we give the nod to the Porsche for a more isolated ride from undesirable tire and wind noise despite its one-inch larger wheels and wider tires all around.

While the contours of the E63’s steering wheel are perfect, the overall feel of the system is not. Especially in the sportier modes, it feels artificially loaded with friction and this takes away from the feel we desire. It’s precise and endowed with a relatively quick 14.5:1 overall ratio, but the steering also tends to feel distant and digital. And in this era of moving away from actual buttons to smooth touch-sensitive pads, the ones on the AMG’s wheel are too numerous and would take some serious repetitive use to learn without having to look down.

Among other things, Porsche is renowned for its steering and the Panamera Sport Turismo is no exception. Equipped with what Porsche calls Power Steering Plus (variable weight), variable ratios, and rear-axle steering, the Panamera’s ability to practically read the driver’s mind, go where they look, and provide useful feedback is top notch. Despite the amount of technology making this all possible, the fluidity and “natural-ness” of it is a feat of engineering. The few actual buttons on the steering wheel with various shapes and textures are easy to learn and operate without looking after one or two studies of their function. Unlike in the E63, cruise control is handled by a separate stalk on the column.

When the Road Gets Curvy

Both of these muscle wagons have the ability to shorten straights between corners to a couple blinks of an eye. Both are equipped with prodigious carbon-ceramic discs that only get better the harder you push them. Both provide neck straining grip in the corners and explosive acceleration out of them. But which ties this all together better?

Features editor Scott Evans often notes how different cars offer either the experience of simply driving or the experience of feeling like part of the car, nestled deep between the wheels. The AMG is the former and the Porsche the latter. Says Evans: “The [E63 S wagon] engages you. It makes you feel like you’re really whipping it—the way the steering lightens when you’re on the throttle it feels like the front wheels are only just touching the ground. Coming hard out of some corners, it feels like it’s just hanging on. But it never complains.”

Then he drove the Porsche. “The best of both worlds. It doesn’t grab you by the throat like the AMG, it’s got more sophistication. It could use a little more attitude, but you can’t argue with the results. It has lighter steering that isn’t quite as jumpy and a more progressive brake pedal. It crouches down and leans into the turns with perfect control. You get those joyous little moments when you’re just dancing on the pedals. Brushing the brake and the throttle as you sail through a corner carrying the absolute maximum speed possible. The car is right on the limit of drifting wide and you’re just balancing it until the road straightens and you can floor it again.”

Picking a Winner: AMG versus Porsche

We could get into the wide price gap between the two; the Panamera Sport Turismo Turbo S is nearly $85,000 more as it sits. We’d argue that anybody who can afford the E63 can afford the Porsche. Interior seating accommodations are a wash, but the E63 S wagon wins the cargo comparison by a wide margin, especially with all seats occupied. The AMG’s infotainment system is as powerful, multi-layered, and graphics-intensive as they come, but that’s also its downfall: having to use a touchpad (or semi-reliable voice command) to navigate the utter complexity is intimidating and frustrating, especially while driving. Conversely, Porsche’s more intuitive and less complicated touchscreen system is like an Apple product that you “get” the moment you interact with it.

So, it comes down to the performance and driving experience. In every data-backed test, the Porsche wins. No question. And there was high praise for the Porsche’s graceful athleticism, how uncommonly organic it feels compared to the AMG’s brutish, take-no-prisoners nature. We admired the immediate familiarity and confidence one feels when driving the Porsche hard, whereas the AMG provides a belching, scratching, emotional ride. In the E63, it takes more effort, planning, and concentration to do what the Panamera does effortlessly, unscripted, and without worry.

Do you prefer wielding an AMG hammer or a finely balanced Porsche sword? That’s up to you, but we choose the 2021 Porsche Panamera Turbo S Sport Turismo. It’s simply the more potent, effective, approachable, and attractive muscle wagon, price be damned.

Karim Habib returns to BMW as head of exterior design 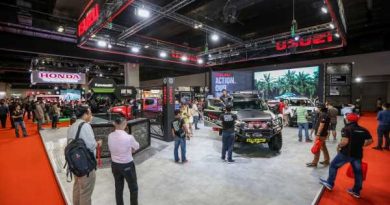 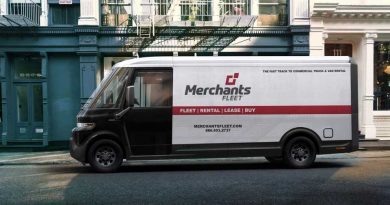