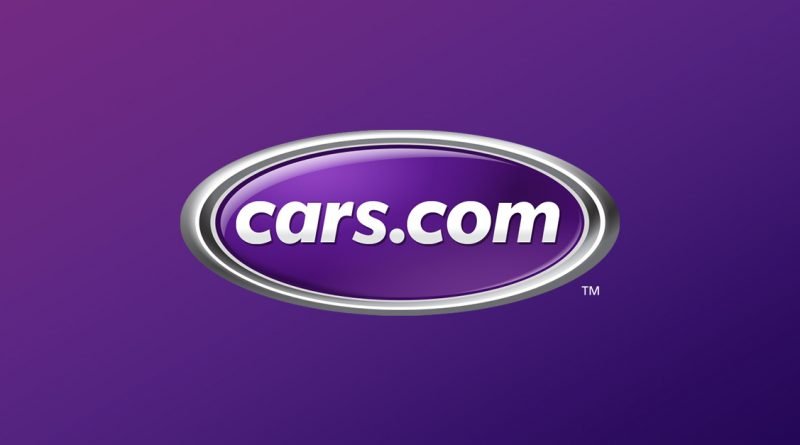 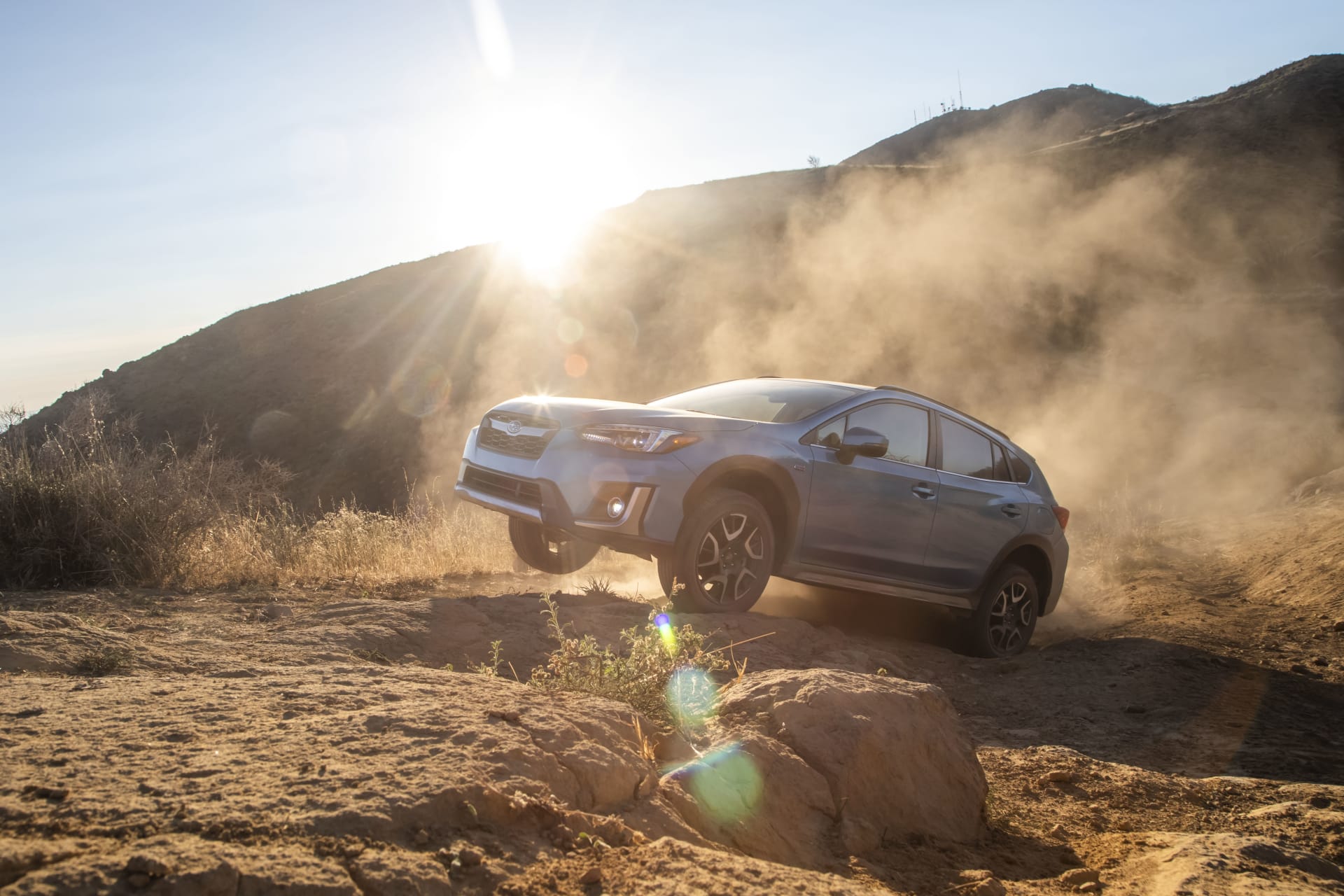 The 2019 Subaru Crosstrek is a likable subcompact SUV thanks to its combination of interior space, driving comfort, refined ride quality and long list of safety features. Add to that standard all-wheel drive and it’s no wonder the Crosstrek is one of our favorites, earning some hard-fought victories against rival subcompact SUVs including the Ford EcoSport, Hyundai Kona and Nissan Rogue Sport.

So, our hopes were high when we hopped behind the wheel of a Crosstrek Hybrid with its electric-only range capabilities … except there’s a substantial price premium for the hybrid model. And, if you need to haul lots of gear — something the adventurous Subaru driver might want to do on a regular basis — there’s an unpleasant surprise when you raise the cargo hatch.

Here’s a quick take on what impressed us most, plus some items that left us cold.

We don’t want to start any test drive by assuming a vehicle is going to impress us, but given our experience with the regular Crosstrek, our hopes were high. It was only back in late 2018 that this Subaru took top honors in our comparison test of subcompact SUVs. It handily bested its rivals, and there’s no arguing the Crosstrek offers a lot of car for the money. 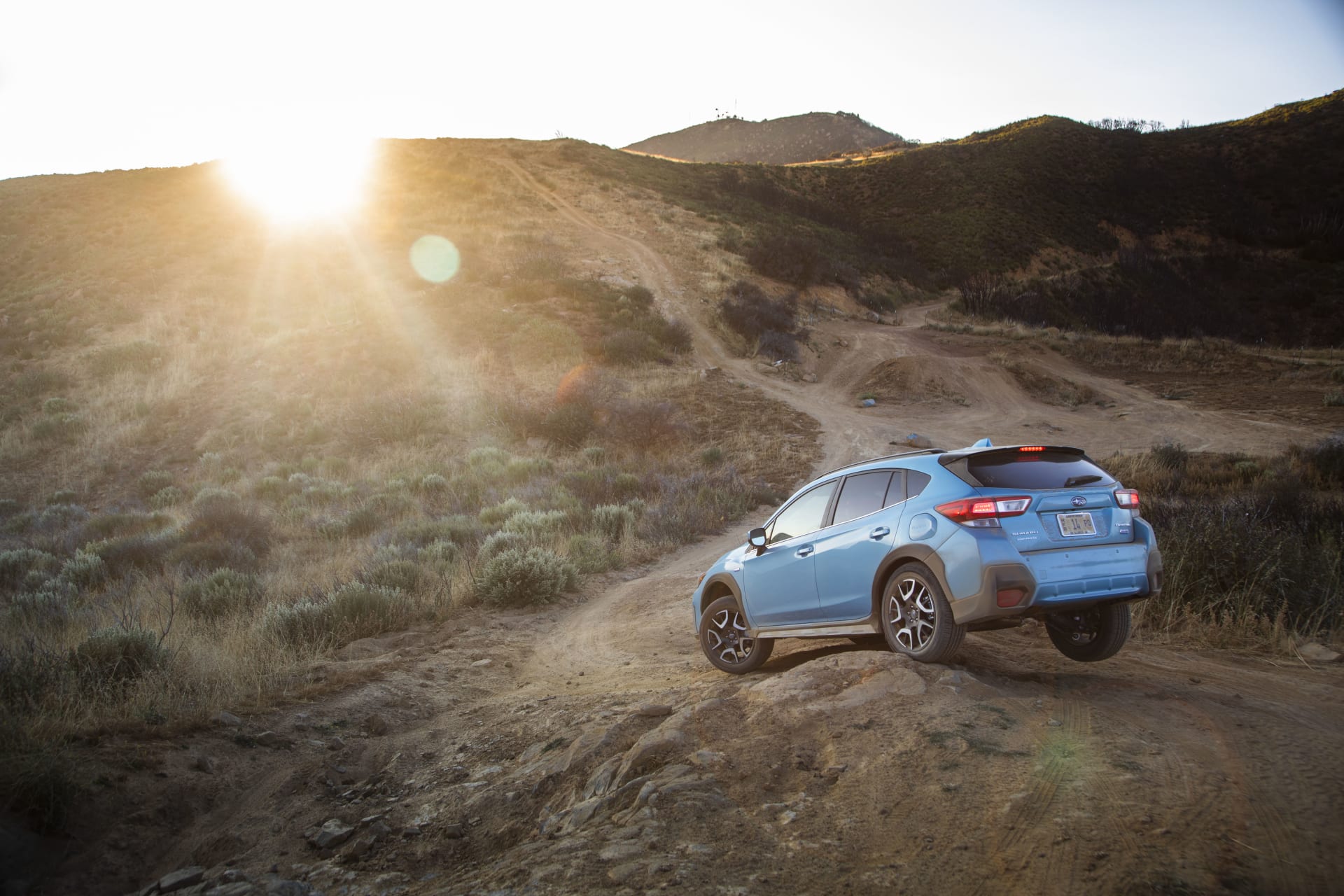 Unlike some competitors that charge extra for all-wheel drive, the feature is standard on every version of the Crosstrek, including the Hybrid. Let’s remember that some of today’s smaller SUVs don’t even offer all-wheel drive as an option (sorry Nissan Kicks and Toyota C-HR, but we’re talking about you).

We’d never mistake the standard Crosstrek for having sports-carlike levels of acceleration, but we were pleasantly surprised with the extra pep from the hybrid model’s gas-electric powertrain. This is despite the fact that the Crosstrek Hybrid weighs about 600 pounds more than the regular model.

Because it’s a plug-in hybrid, you’ll eventually have to plug this Crosstrek Hybrid into an outlet to get the most out of its powertrain. Thankfully, Subaru doesn’t make any loaded claims about outrageously quick recharging times using some fancy fast-charging system: When using a normal 120-volt wall outlet, you can juice up the lithium-ion battery pack in about five hours; a 240-volt outlet drops the time to about two hours. 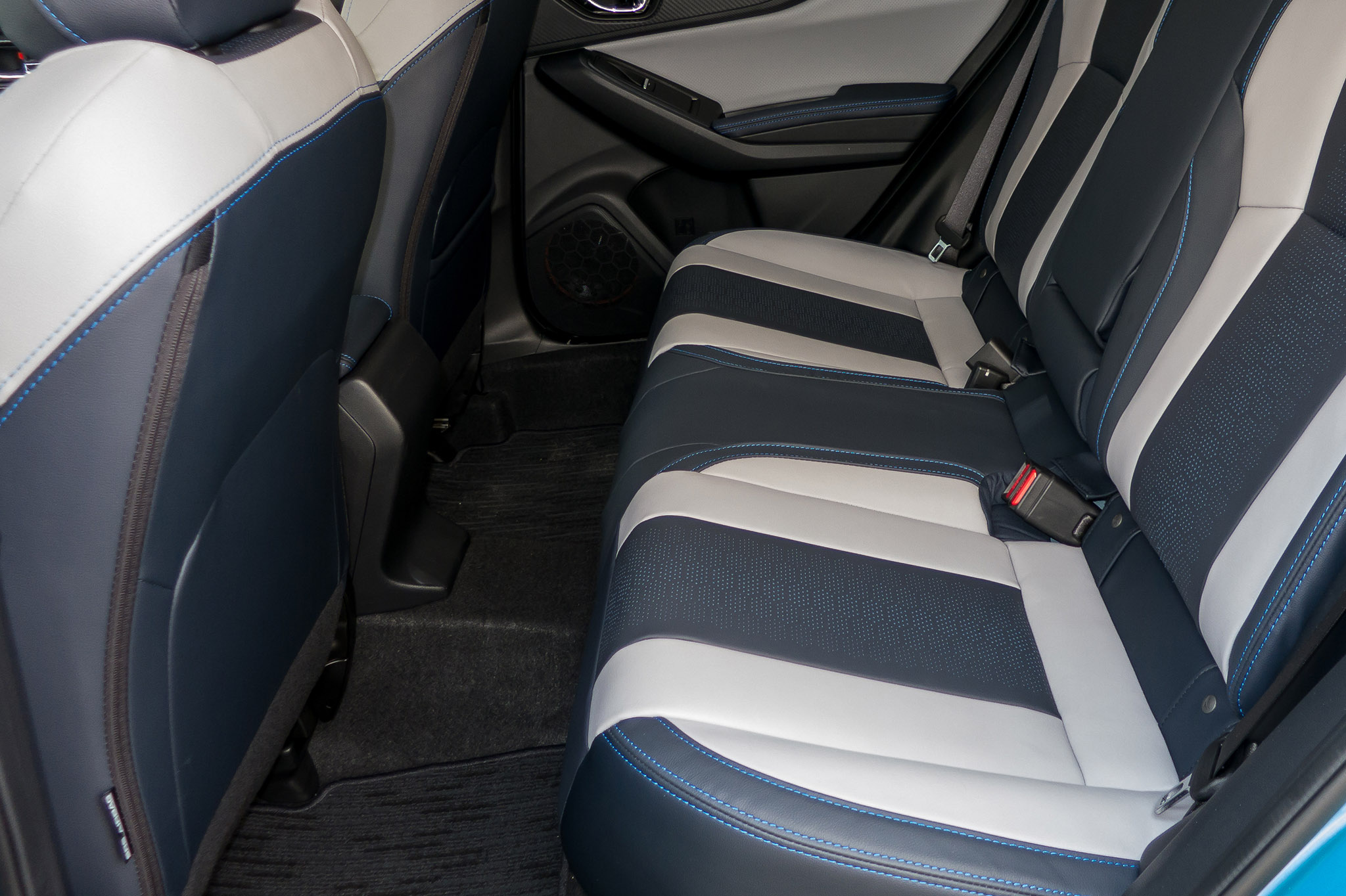 The Crosstrek feels like a larger and more substantial vehicle than it looks. If you think the quirky wagonlike design means it won’t have the presence of a “true” SUV, think again. There is plenty of rear legroom, which might come as a surprise given the Crosstrek Hybrid’s relatively petite proportions. Many of its direct competitors are far stingier when it comes to stretch-out space for rear occupants.

The Crosstrek Hybrid really shines when you’re behind the wheel. During our recent review, we praised its swift handling and premium ride quality. The brakes also felt “excellent” and avoided the strange dead-feeling brake pedal that plagues so many other hybrids. 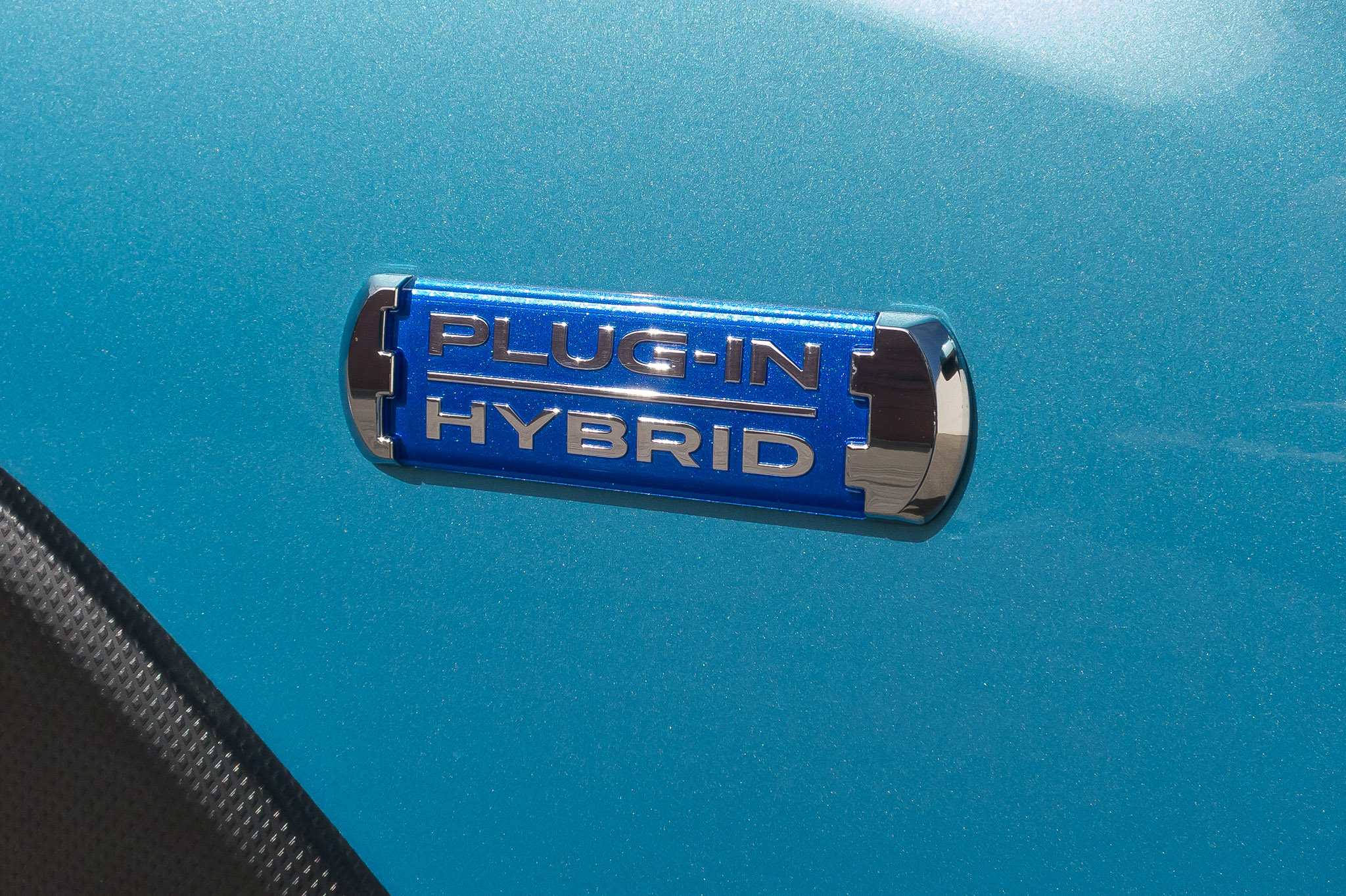 While you can’t totally prevent the gas-fed engine from cutting in, electric-only driving range is accessible. As long as you don’t stomp the gas pedal at every opportunity, we found it’s easy to keep the Crosstrek Hybrid operating solely in EV mode. In total, Subaru says it has 17 miles of EV range, but during our test drive, we managed more than 21 miles before the gas engine kicked in.

Get ready, because the Crosstrek Hybrid costs a staggering $13,000 more than the base gas model. Even when you compare the near fully loaded Crosstrek Hybrid to higher trim levels in the lineup, you’re still going to pay thousands more for this gas-electric variant. 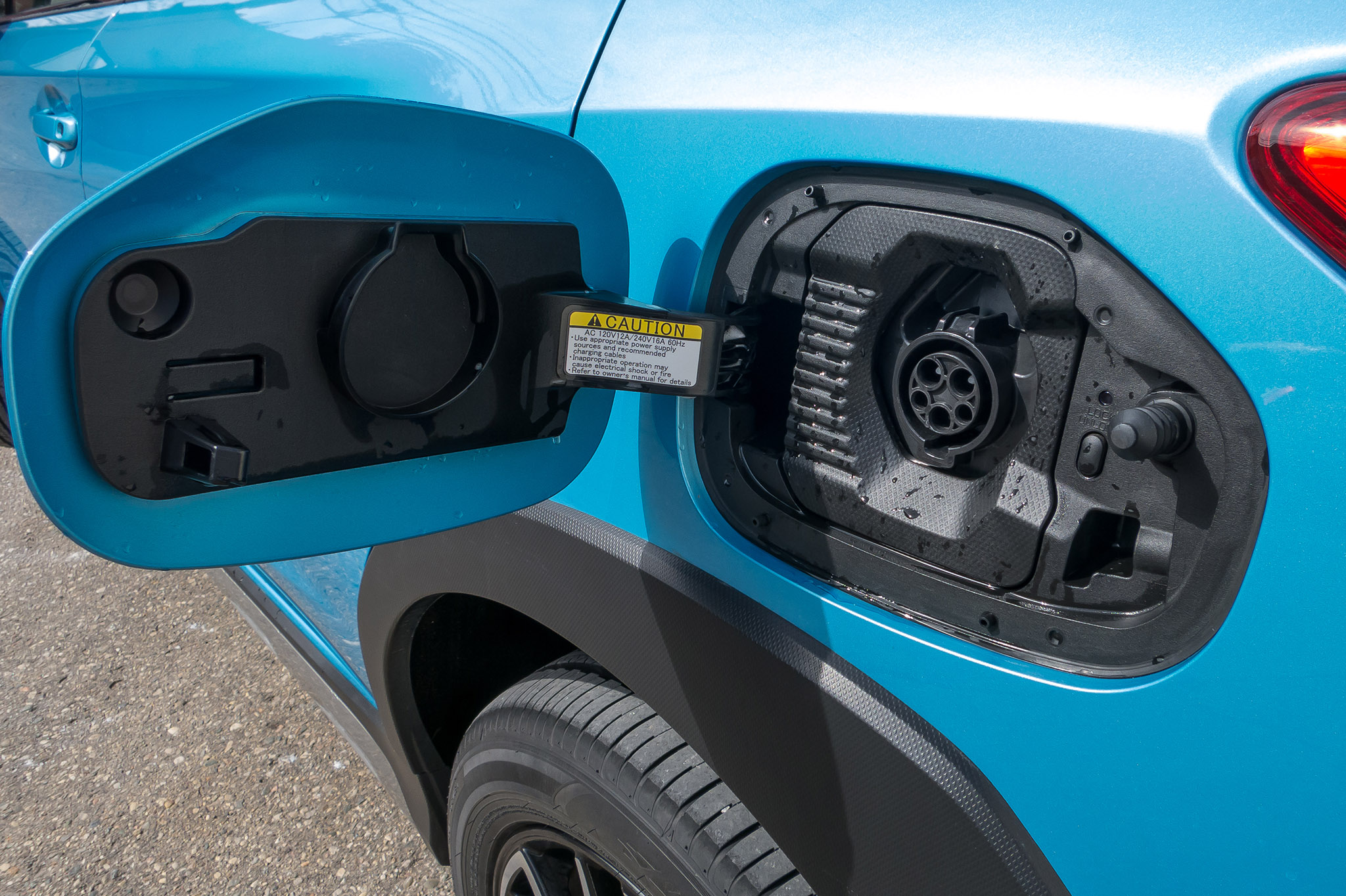 Why, Subaru? Why did you put the charging port at the rear of the Crosstrek Hybrid? On one side of the car, you’ll find the gas flap; on the opposite is a charge port for the battery pack. That sounds cute, but it’s maddening and leads to draping cords around the car. Move that port to the nose of the Crosstrek, please!

Here’s a funny plot twist: Despite having an electric-only driving range, the overall range of the Crosstrek Hybrid is the same as the standard model. That’s because the Hybrid uses a much smaller gas tank. No matter which you choose, total range holds firm at 480 miles — well, 481 (in the standard Crosstrek) if you want to be really picky.

4. Who Stole the Cargo Room? Oh, the Batteries 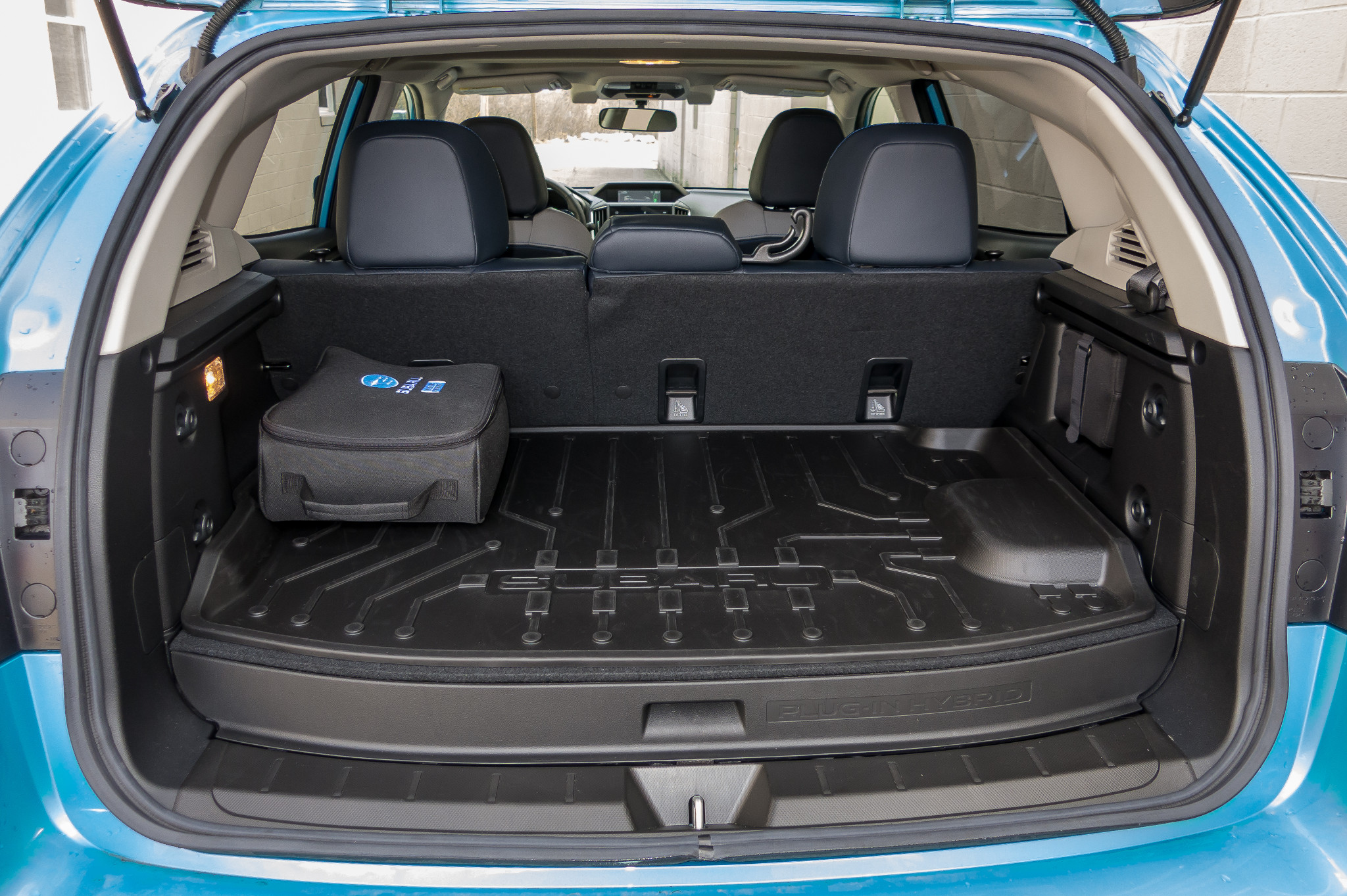 This could be a deal-breaker for many people interested in the Crosstrek Hybrid. Open the rear cargo hatch and be prepared for a shock: The battery pack takes a big chunk out of rear cargo space. The floor of the trunk looks like you’ve hidden two or three spare tires beneath it. The standard Crosstrek has 20.8 cubic feet of cargo room behind the back seat, but the Hybrid only has 15.9 cubic feet.

We like that Subaru loads the Crosstrek with safety features, but we wish some of them weren’t so annoying. For example, the lane keep assist is overly sensitive, while the adaptive cruise control has a nasty habit of beeping whenever a vehicle is blocking you or once a car moves out of the way. It likes to beep — a lot. 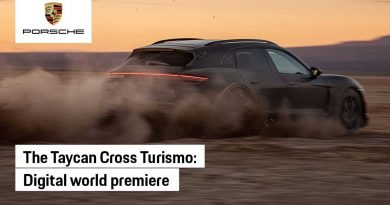 ‘None of our business!’ Motorists thankful for Brexit as EU bans petrol and diesel cars